Conan 1.34 brings a few feature additions and a handful of bug fixes. The short list of features is not for lack of effort or time, but instead reflects a milestone in the Conan team. This was the first release cycle where the majority of developer time and effort was spent working on major changes in Conan 2.0, many of which have been planned for multiple years. So, this post will focus on highlighting some of the major roadmap items under construction right now. Also of note, this includes one major piece of feedback from the Conan 2.0 Tribe which we will discuss.

Before talking about Conan 2.0, let’s briefly summarize the one major feature addition in this release, that is the concept of a “lockfile bundle”. Lockfile bundles are intended to help CI/build engineers handle collections of lockfiles in a more safe and efficient way. The related commands can be found by running:

Note: Lockfile bundles and related commands are all experimental.

Here’s an example of the syntax for creating a bundle:

Here is a diagram to illustrate the data structure that gets created inside the file “lock.bundle” 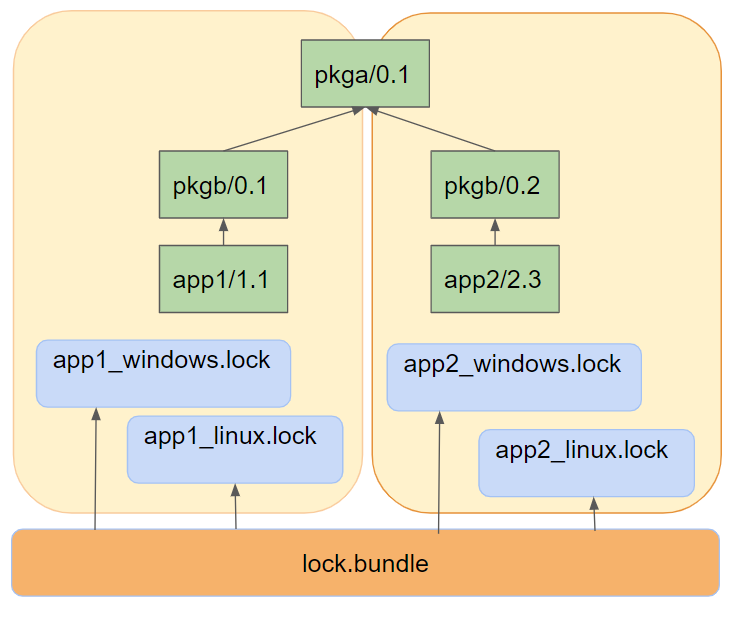 The concept of a lock bundle aims to address two problems we’ve discovered in the management of lockfiles at scale in enterprise codebases.

Here’s an example of the syntax to rebuild pkga once and update both lockfiles using the bundle:

The motivation for this is that it is extremely common to have multiple lockfiles which share packages with identical package_id. Ever since lockfiles were released, the typical approach to using them in CI was to run 1-build-per-lockfile. But, when rebuilding “per-lockfile” in such cases, redundant rebuilds would virtually always occur, causing a number of different scalability issues. With “bundles”, CI engineers can now configure jobs to build “per-package-id”, and get the same exact benefit, while avoiding these issues.

Second, “lock bundles” enable the calculation of a build-order.json file for a collection of lockfiles. This was important for CI workflows, because CI jobs generally rebuild multiple configurations using multiple lockfiles in a single “run”. At the end of such CI jobs, the ideal last step is to use Conan to produce a build-order.json file to determine the next “packages” which need to be rebuilt, and map those to the CI jobs that need to be triggered. However, build-order.json was previously only produced on a “per-lockfile” basis, and build-orders for different lockfiles often yield different “next steps”. So, with this feature, we can now produce a “build-order” which takes into account all the lockfiles in the bundle. The big payoff here is that it enables maximum parallelization of CI jobs, and lets the Conan dependency tree drive the CI workflow process.

Within the last month, the Conan team has now officially turned the majority of its focus on development time toward V2. With that said, it’s probably also a good opportunity to set some expectations. Keep in mind that most of the major changes and refactors that have been planned for V2 are currently still “just plans”. They must now be fully developed and tested in conjunction with all the other changes. Furthermore, many of them will need to be backported to Conan 1.x so that there is a safe migration path between Conan 1.x and 2.x. That is to say, it’s not just a matter of writing the code to add features. It includes new requirements, new concepts, new abstractions, and LOTS of trial and error. Nonetheless, we plan to stay aggressive and focused until it’s done.

If you want to follow along with the progress, or even contribute, this is perhaps the best link to track Conan 2.0 progress in general:

Here are some highlights which map to some of the most active work being done right now:

The “New local development flow” is unique in this list. It represents a significant change to Conan which was first described in a formal document, and sent to the Conan 2.0 Tribe for feedback. The feedback was generally supportive, but included a fairly unanimous suggestion for a major change to one of the details, which was accepted into the final design plan. This was a highly successful exercise of the Tribe, and the exact reason it was formed.

Again, the list of work for Conan 2.0 above is just a few of the items which are actively being worked on right now. There’s a pretty significant number of pull-requests which have already been merged, and a lot more to come. We’ll almost certainly be focusing future blog posts on increasing awareness of new pull-requests as they come about in a draft status, so be sure to stay tuned!

Remember, there is no better time to share any valuable insight or use cases you might have with the Conan team than yesterday. However, today is a close second, so please do consider reaching out and providing feedback on these new features and changes if you have not already.

Besides the items listed above, there was a long list of fairly impactful bug fixes you may wish to read about. If so, please refer to the changelog for the complete list.

We hope you enjoy this release, and look forward to your feedback.