In July of this year, we announced “the launch of the Conan 2.0 Tribe” and the plan to move Conan 2.0 forward with the help and feedback of the tribe members. We’re now beginning to execute on that plan, and provide some additional details about how you can get engaged and follow the progress. 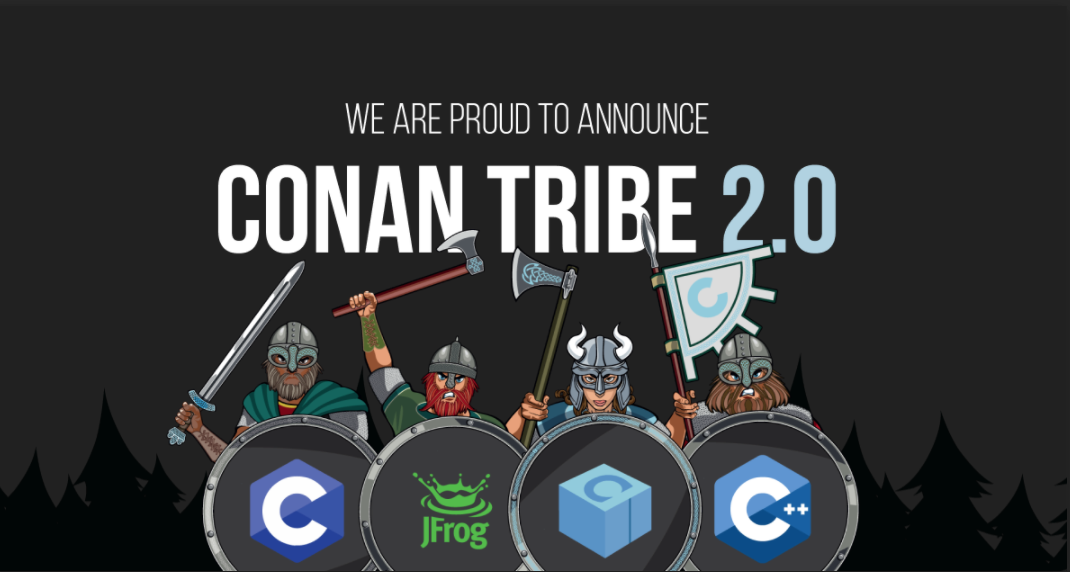 Community Response to the Tribe 2.0 Launch

Before we talk about Conan 2.0, we want to take a moment to share our appreciation to everyone who responded to the call when we announced the Conan Tribe. We were amazed at how many people have volunteered to engage in the process. It was great to read all the descriptions from users about how and where they use Conan, and why they were so interested in being involved. Here is the current list of tribe members, to whom we are extremely grateful. Check more details about the tribe members in conan.io site.

It has been a few months since the initial announcement, so we also want to reiterate why we’ve created the tribe to begin with, and what our primary goals are. There were two major reasons for the tribe. First, we believe Conan’s evolution should be guided by all our users with a consistent and unbiased approach. This includes our enterprise users, who we’ve found are under-represented in the existing public discussions. It also includes the open-source community, who have been providing the vast majority of feedback thus far. The tribe provides a way to meet the goal and of consistent and unbiased feedback, and reconcile both sets of feedback together.

Regarding Conan’s enterprise users, it’s important to point out just how important and numerous these people are. In a single enterprise organization with a C/C++ codebase, it’s not uncommon for there to be 100-500 individuals who might use Conan. We also know of cases where there are 1000+. Conan is now used in hundreds of these enterprise organizations, and even with conservative estimates, the total number of Conan users in these organizations already dwarfs the number of developers who use Conan for open-source development or small projects. Furthermore, this gap will only grow over time. The problem today is that we don’t receive an amount of feedback from these users which is proportional to their numbers. Many of these developers either can’t engage with the community due to company policy, or choose not to for other reasons.

Conversely, from the open-source community, we get plenty of feedback. In the third quarter of 2020, the Conan repository received tremendous numbers of issues and pull requests:

This translates to 10,000+ messages in the form of notifications and conversations. This also doesn’t account for all the conversations that take place in the #conan channel of the CPPLang slack workspace, which is consistently one of the most active channels.

So, when it comes to major design choices and potentially breaking changes, the Conan Tribe 2.0 also aims to help us in meeting the goal of gathering the maximum feedback in the most constructive and scalable way possible.

The majority of interactions for the tribe will take place under the Conan Tribe Github repository.

One of the fundamental challenges in evolving a versatile development tool like Conan is that it’s very difficult for most users to find the time to understand every proposed change, and determine whether or not it will affect them, and in what way. Also, it can be tedious to provide a written response to each issue, and tedious for the Conan team to “weigh” written responses.

Thus, the format for tribe feedback aims to be extremely simple for both the tribe members and the maintainers. The Conan team will provide a written summary of each significant change or feature in a Github pull request. Tribe members will then vote on the Github pull request using the Github upvote/downvote buttons. Of note, Conan community members who have not joined the tribe can still vote, however the Github API allows the Conan team to group and evaluate the votes from tribe-members independently from the rest. As an example, here is a pull request to discuss the minimum Python version Conan will support.

There is also an email group for the tribe. This will be used for notifications, results reporting, and additional discussion. There is also another reason for the email group. Many of the Conan tribe members represent private organizations. These members need a way to provide feedback which may contain sensitive information which cannot be disclosed to the public. So, any material conversations or conclusions which will impact decisions about Conan will ultimately be shared with the tribe and community, however the Conan team needs the ability to anonymize and protect the source of information when necessary. Finally, feedback from tribe members will be requested at least every 2 weeks, but initially more often.

There is a long list of items on the roadmap for 2.0. Many of those items have been explored to some degree, however many others haven’t even been discussed. Thus, the dates that we will be planning for and suggesting here should be considered very rough estimates rather than a commitment.

Beginning in December, we plan to create a branch (tentatively named “develop2”) which will be open for pull requests. This will become the new landing place for all new changes and features which would be breaking for Conan 1.x. As a reminder, the CONAN_V2_MODE environment variable currently exists with a default value of “Off”, which allowed for a number of potentially-breaking changes and features to be added to Conan 1.x in a safe way. This has enabled power users and our own dev team to explore some of the features in real-world scenarios prior to releasing Conan 2.0. So, this new branch will also effectively change the default value for the CONAN_V2_MODE to “On”.

Beginning sometime in Q1 of 2021, Conan will begin continuously publishing “alpha releases” as we work out final bugs and incorporate the feedback from the users in the tribe who are working off the new branch. This process will go on as long as it needs to until we feel we’ve worked out any fundamental problems and are confident in the stability and viability of the release. At that point (later in 2021), we will move to a “beta release” model.

In closing, we want to reiterate one of the major purposes of this blog post, which is to extend our thanks to everyone in the tribe. We really do feel as though we have a completely unique, special, and downright awesome user community surrounding Conan, and we just can’t say enough about it. The other purpose was to provide an update on the status, and the links necessary to see how we’re moving forward (and get engaged.)

Also, to inquire about the member application process, please send an email to the Conan team.