Conan 1.26 has been released. Without a doubt, the most substantial feature in this release is the introduction of three new recipe methods! The first and most significant one is the toolchain() method, so let’s talk about that first.

The primary goal of the toolchain() method is to separate the generation of the build system files from the build method, so that those build system files can be used for building outside of Conan (without having to run conan create or conan build). In general, the use of Conan dependency information outside of Conan has come up in many different contexts. We’re working on several of those, and this new method aims to provide support cases related to local development flows.

In theory, changing an existing recipe to use the new method can and should be transparent and functionally equivalent. Here’s a summary of how this new feature would be used:

The other two methods added in this release are export() and export_sources(). The goal of these methods is to provide more flexible method-based alternatives to the well-known-attributes of exports and exports_sources. It works by exposing a self.copy() function just like the source() method.

So, for example, you could change from this:

The next biggest accouncement from this release is that we’ve made yet another major step towards more transparent CMake integration by adding components support to the cmake_find_package generator. With this release, users can now consume Conan dependencies within CMake projects in a truly transparent way. The find_package generator provides the transparent mechanism, and the components feature, along with the customizable target name feature in Conan, enable all the targets align with existing target names, references, and interdependencies which are used in the CMakeLists.txt of the open-source community. This is the culmination of more than a years worth of planning, so it’s a very exciting release for that reason.

Below is a graphic demonstrating each of the nuanced dependencies which can exist among projects and components. In this graphic: 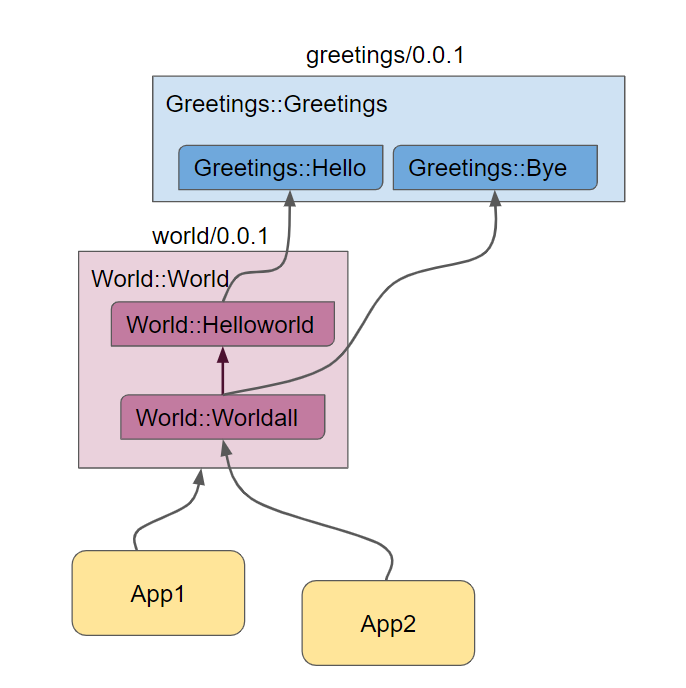 Of note, there is a related CMake generator called cmake_find_package_multi. This generator still does not support components, but that is planned for a future release.

In the past, there have been many comments and suggestions about various annoyances when setting up a new conan home directory from scratch. conan config install handles a vast majority of use-cases, but not all of them. There are many niche cases where users want to provision a new workspace with all the defaults values from the current conan version, and this was particularly awkward. conan config init provides a simple and intuitive way to handle these cases.

One piece of feedback we’ve recieved from multiple users is that MSBuild lacks anything resembling the “targets” abstraction found in CMake. The variables produced in the current Visual Studio generators are equivalent to global variables in CMake. So, when importing conanbuildinfo.props into a Visual Studio project, all dependencies get used for all builds in the project. This can be problematic for a number of reasons.

The new MSBuild Generator intends to offer a number of advantages over the current Visual Studio generators. First, the name of the generator matches the name of the build system which is just a consistency improvement. More importantly, it uses a completely different structure in the way the dependency information is produced in the generated .props files. This makes it possible for users to selectively import dependencies on a per-project basis . As we intend for this generator to become the new standard for MSBuild projects, we are very interested in user feedback. Please reach out and let us know what you think if you have the opportunity to try it out.

For recipe authors, we have quite a few additional new features. We have a new “remove_files_by_mask” tool for cleaning. We have a new stdcpp_library tool to make evaluating the C++ standard for the current build, and writing conditionals around it easier. On a related note, we’ve also further improved our support for the Intel compiler on two fronts. We’re now handling the C++ standard flag automatically, and making the CMake helper call compilervars.sh, which is required for proper interop with Intel C++ compiler.

As usual, we cannot cover everything in the release in this blog post, so visit the changelog for the complete list.