Conan 1.25 follows up the previous release with another wave of progress related to the new cross-build modeling. There are also some brand new features we are excited about. Conan has learned to update it’s configurations and profiles automatically by enabling the ability to schedule the conan config install command. We’ve also dramatically improved the output of conan search when the --table flag is passed. We’ve added support for GCC 9.3, GCC 10, and Intel 9.1 compilers, and a substantial list of bug fixes.

In the previous release, we introduced the new abstraction of “contexts” along with some core functionality surrounding them. However, the implementation was still not complete enough for recipes which need this functionality to be refactored to use the new model. In this release, we fill the gaps so that recipes can now start to take advantage of the new model.
1.25 features two additional variables on the conanfile class which can be accessed and evaluated by recipes:

These are in addition to the existing settings variable which still exists. The documentation goes into detail as to when these variables will exist and how they are different. In summary, settings will represent the host settings during the builds of recipes in the host context. Otherwise it will represent the build context. Also, it’s not uncommon for cross-building cases when you’re in one context and need to access the settings from the other context. For these cases, settings_build and settings_target enable access to both contexts under all circumstances.

Here is a graphic to help illustrate the variables and what their values would be in different contexts: 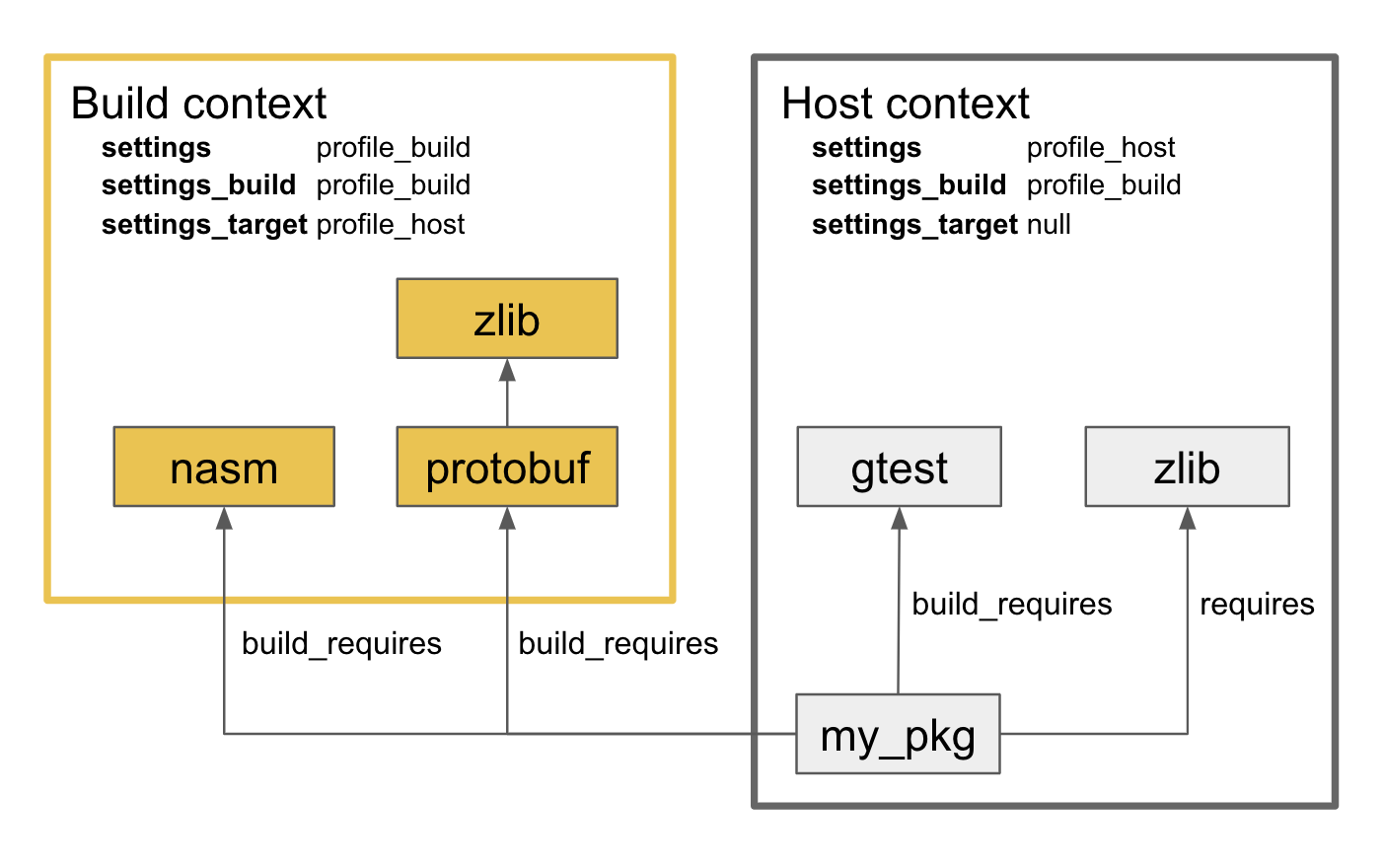 In this release, we make another large stride in the journey to provide robust modeling of “components” within packages. The modeling is declared within the cpp_info object during the package_info() method.

The CMake build system was the main driver for this new abstraction. Conan has many generators which have continually tried to feed information into CMake in such a way that existing CMake files and user environments don’t need to change. This has been exceptionally hard, and one of the reasons was CMake’s unique concept of Target::Component. Another reason was the mismatch of naming convention. CMake targets for open-source libraries typically had straighforward names (eg. OpenSSL), while Conan generators produce targets with a CONAN_PKG prefix to avoid conflict (eg. CONAN_PKG::OpenSSL).

It turns out that a collision is desirable in many scenarios in order to achieve transparent integration for existing CMakeLists.txt.

So, with Conan 1.25, Conan packages for open-source libraries can be refactored to produce their targets with their well-known names, and those targets can be further defined with their well-known components. This will take place in the coming weeks. Meanwhile, we will be refactoring the existing CMake generators to evaluate this new cpp_info members and generate files based on the new modeling. This should be a big step forward toward the goal of more transparent integration with existing CMakeLists.txt.

Here are some example package_info() methods which demonstrate the new core features:

A target with two named components

A dependency from a component to different package

There is even more to this new model, including generator-specific attributes, so please refer to the documentation if you want to understand all the new capabilities.

A common request among enterprise teams was for developers to have a less tedious way to keep the profiles and settings on their local machines in-sync with the latest ones maintained in a configuration repository. In Conan 1.25, a new conan configuration parameter has been added:

Downloading files is a frequent activity for the Conan client. For a variety of reasons, downloads can fail. Previously, when a download would fail, it would immediately restart from scratch. This can be frustrating for any user,
but for those users working with very large binaries, repeated failures of downloads of such binaries can become a blocker very easily. This impact can be felt within local developer workflows as well as in CI builds.

In this release, Conan learned the ability to resume downloads which have failed. Because Conan already had logic to retry failed transfers, this new resumption logic will engage automatically, and should work very well to mitigate any impact coming from network connectivity issues.

Finally, Conan has received a cosmetic upgrade in the form of a new search table output for the Conan Search command. This is part of an ongoing effort to improve overall UX surrounding searching with Conan. Here is a preview of the new table:

The new HTML table is a vast improvement over the previous version. It provides the most common features one might expect for browsing a datatable with a long list of fields. For example… sort and filter! It also provides configurable pagination and grouping of sub-settings under a parent column.

As usual, we cannot cover everything in the release in this blog post, so visit the changelog for the complete list.