Conan 1.24 comes with a substantial list of completed feature requests, both major and minor. The largest changes relate to the cross-build model and provide more power when working with some of the most complex packages users are working on today. This includes Protobuf and LLVM to name a few. There are also some subtle additions which are incremental steps towards some long-term goals such as supporting “components” in build systems like CMake, providing a robust abstraction for cppstd, helping users prepare for Conan V2.0 with more opt-in deprecations.

In 2017, we implemented cross-build support to Conan largely based on experience with cross-build models in build systems. We updated the settings model of os and arch with the new distinct settings of os_build/arch_build and os_target/arch_target. That model has received a lot of use both internally and from users which resulted in very valuable feedback from a variety of use cases. Based on this feedback, it was clear that the model was insufficient and something more robust was needed.

The new model adds a new command-line argument to specify a completely separate profile which will be used to build build_requires in the dependency graph. This sounds simple, but is accomplished by providing a new abstraction called “contexts”. There is one context in which build_requirements are built (called the “build context”), and another context in which the rest of the requirements are built (called the “host context”). Of note, when necessary, it is also possible to force build requirements to stay in the host context if they are declared in recipes. Here is a graphic showing how “contexts” can be used to allow a build_requirement such as “protobuf” to use “zlib” with one profile, while the package “my_pkg” uses zlib with a different profile. 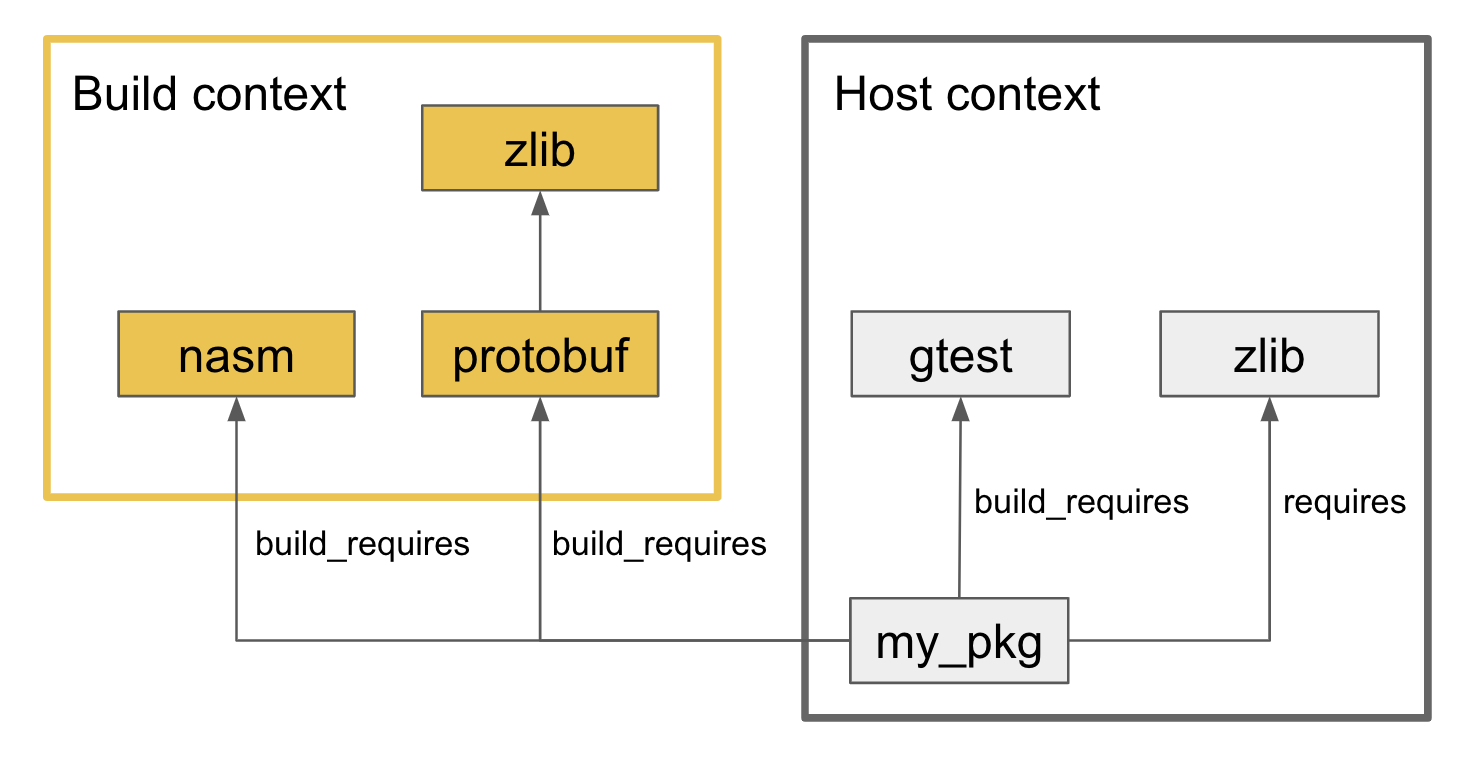 At it’s core, conanfile.py is a Python class.  All of it’s existing functions have been carefully designed to model the problems of building and packaging for C/C++.  However, at scale, there is a practical need to manage and share code among recipes (such as providing a base class for Conanfiles) and python_requires was created to enable that.

Based on feedback from users, there are still some capabilities surrounding the fundamental instantiation of the Conanfile Python object which would be valuable but are not currently possible. The new init() method is now the “first” conanfile function to be run if defined (it runs before config_options.)

Note : init() method is intended for use with python_requires(). Other uses may lead to undesirable consequences.

A novel new generator has been added which produces a markdown (.md) file from the package which provides a summary of package information based on the Conan package. This is suitable to be rendered by popular web frontends to git repositories such as Github/Gitlab/Bitbucket where special rendering for README.md is commonplace. 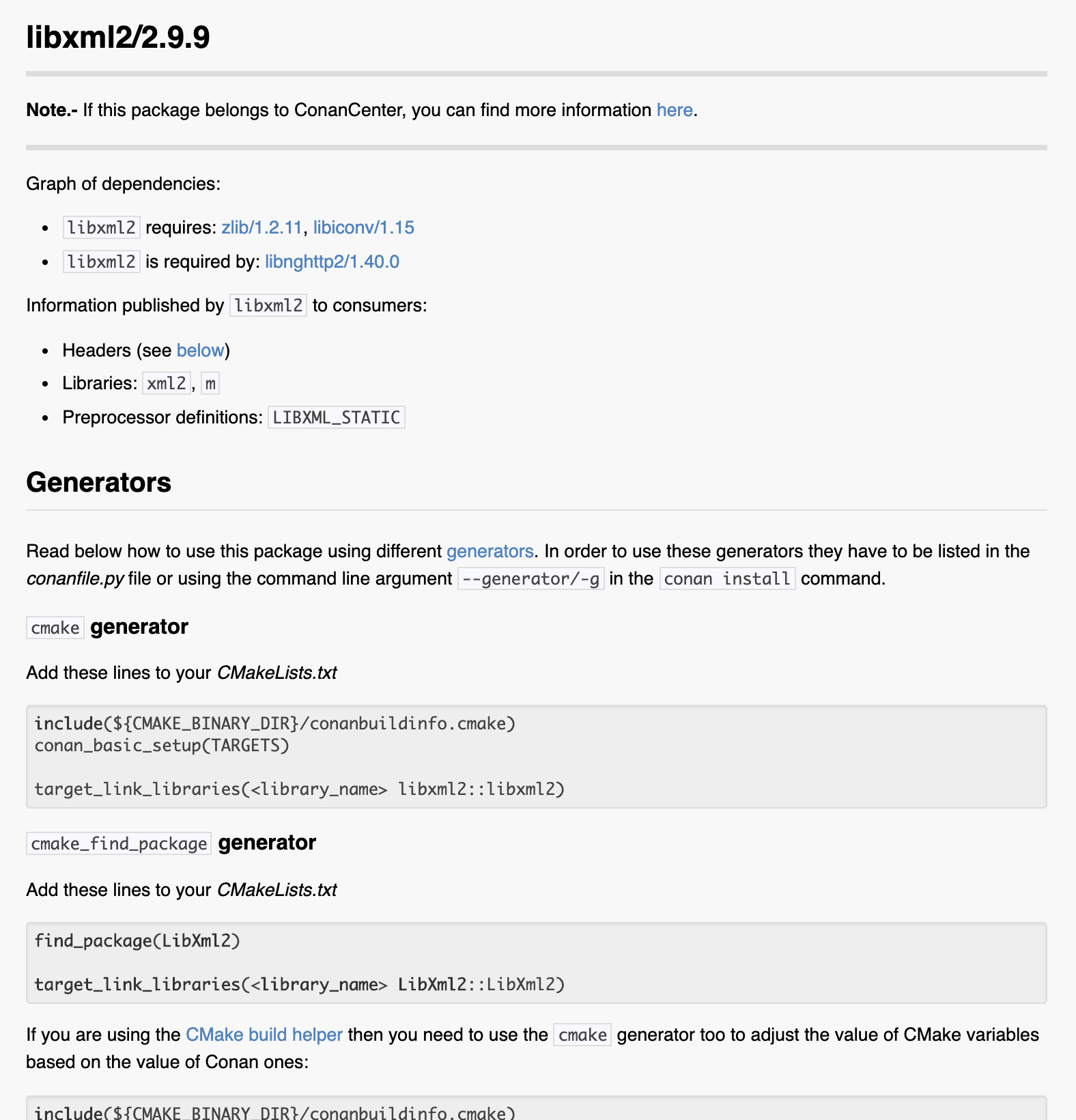 Many popular libraries use CMake as a build system, and leverage a CMake feature known as “target components”. This allows consumers to compile and link against certain parts of a library while ignoring others. This granularity adds a lot of complexity for tools trying to integrate with CMake, but it is widely used by consumers of popular libraries so it was always something we wanted to support. In this release, we add some features which bring us closer to that goal. Also, it is conceivable that other build systems may feature a similar concept, so we’ve tried to implement these features in a general way.

For this release, we’ve added a new member to cpp_info called “components”. It is a dictionary where the keys are component names, and the values are each independent cpp_info instances. Thus, each component can be advertised with all the same info that a separate package would (in terms of cpp_info).  If you’re familiar with CMake components and how Conan generators work, it should be fairly easy to imagine the existing CMake generator converting these Conan components into CMake components.

It’s important to point out that this new member is not yet implemented into any generators. In fact, the components member has intentionally been omitted from deps_cpp_info so that it cannot be used.  As stated earlier, it is just the first step toward eventually supporting the components concept. Stay tuned to the next release for additional progress.

In Conan v1.x, there were several mechanisms added to empower recipe authors to share code among many recipes. After some time in the wild, it’s become clear that some of these mechanisms have problems of safety or supportability. In this release, enabling CONAN_V2_MODE will disable two of these mechanisms:

The default global behavior of SystemPackageTool has always been to automatically run system package manager commands to fetch or update system dependencies. Users could apply a global override to this behavior by setting the environment variable CONAN_SYSREQUIRES_MODE to one of the other two modes: disabled or verify.

Both the default and the environment variable are “global” in nature (affecting all recipes). Based upon user request, we have now added a new way to affect this behavior: “per-package”. Each conanfile.py can now specify it’s own default behavior a default_mode parameter of the SystemPackageTool constructor.

Thus, the “new” precedence for controlling this behavior is as follows:

This release actually contains too many exciting features and bugfixes for us to highlight them all. As always, you can see the complete list in the changelog.  However, here’s a list of honorable mentions: