What are deterministic builds?

A deterministic build is a process of building the same source code with the same build environment and build instructions producing the same binary in two builds, even if they are made on different machines, build directories and with different names. They are also sometimes called reproducible or hermetic builds if it is guaranteed to produce the same binaries even compiling from different folders.

Deterministic builds should be guaranteed for a given build environment. That means that certain variables such as the operating system, build system versions and target architecture are assumed to remain the same between different builds.

There are lots of efforts coming from different organizations in the past years to achieve deterministic builds such as Chromium, Reproducible builds, or Yocto.

The importance of deterministic builds

There are two main reasons why deterministic builds are important:

Binaries involved in the building process in C/C++

There are different types of binaries that are created during the building process in C/C++ depending on the operating system.

Many different factors can make your builds non-deterministic. Factors will vary between different operating systems and compilers. Each compiler has specific options to fix the sources of indeterminism. To date gcc and clang are the ones that incorporate more options to fix the sources of variation. For msvc there are some undocumented options that you can try but in the end, you will probably need to patch the binaries to get deterministic builds.

Timestamps introduced by the compiler/linker

There are two main reasons for that our binaries could end up containing time information that will make them not reproducible:

Let’s put an example of where does this information ends with a basic hello world project linking a static library in MacOs.

The library prints a message in the terminal:

And the application will use it to print a “Hello World!” message:

We will use CMake to build the project:

This is interesting because the executables files helloA and helloB have the same checksums as well as the intermediate Mach-O object files hello_world.cpp.o but that is not the case of the .a files. That is because they store the information of the intermediate object files in archive format. The definition of the header of this format includes a field named st_time set by a stat system call. If we inspect the libHelloLibA.a and libHelloLibB.a using otool to show the headers:

We can see that the file includes several time fields that will make our build non-deterministic. Let’s note that those fields are not propagated to the final executable because they have the same checksum. This problem would also happen if building in Windows with Visual Studio but with the Portable Executable instead of Mach-O.

At this point we could try to make things even worse and force our binaries to be non-deterministic as well. If we change main.cpp file to include the __TIME__ macro:

Getting the checksums of the files again:

We see that now we have different binaries as well. We could analyze the executable file with a tool such as diffoscope that shows us the difference between the two binaries:

That shows that the __TIME__ information was inserted in the binary making it non-deterministic. Let’s see what we could do to avoid this.

Microsoft Visual Studio has a linker flag /Brepro that is undocumented by Microsoft. That flag sets the timestamps from the Portable Executable format to a -1 value as can be seen in the image below. 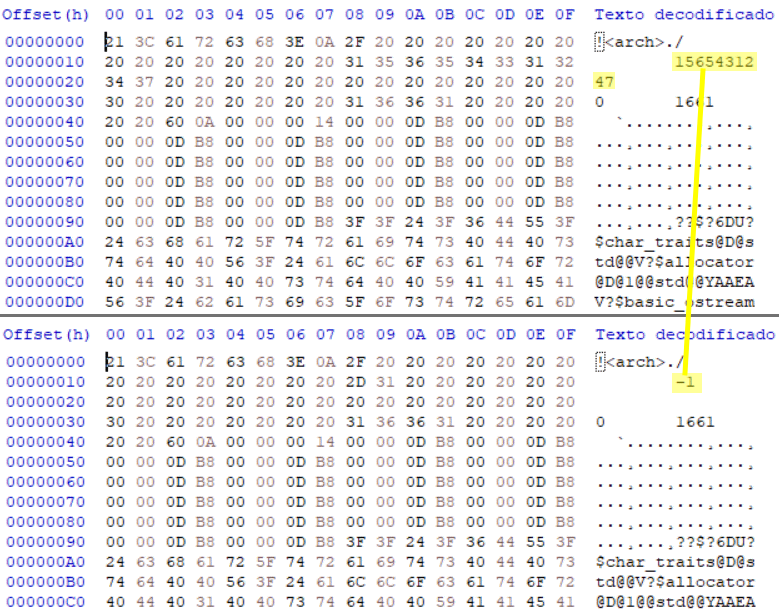 To activate that flag with CMake we will have to add this lines if creating a .exe:

or this for .lib

The problem is that this flag makes the binaries reproducible (regarding timestamps in the file format) in our final binary is a .exe but will not remove all timestamps from the .lib (the same problem that we talked about with the Mach-O object files above). The TimeDateStamp field from the COFF File Header for the .lib files will stay. The only way to remove this information from the .lib binary is patching the .lib substituting the bytes corresponding to the TimeDateStamp field with any known value.

Possible solutions for GCC and CLANG

Let’s continue with our example project for MacOs and see what the results are when setting ZERO_AR_DATE environment variable.

Now, if we build our executable and libraries (omitting the __DATE__ macro in the sources), we get:

All the checksums are now the same. And analyzing the .a files headers:

We can see that the timestamp field of the library header has been set to zero value.

If the same sources are compiled in different folders sometimes folder information is propagated to the binaries. This can happen mainly for two reasons:

Continuing with our hello world MacOs example let’s separate the sources so we can show the effect over the final binaries. The project structure will be like the one below.

If we build our binaries in Debug mode.

We get the following checksums:

Again the solutions will depend on the compiler used:

The best way to solve this is by adding the flags to compiler options. If we are using CMake:

File ordering can be a problem if directories are read to list their files. For example Unix does not have a deterministic order in which readdir() and listdir() should return the contents of a directory, so trusting in these functions to feed the build system could produce non-deterministic builds.

The same problem arises for example if your build system stores the files for the linker in a container (like a regular python dictionary) that can return the elements in a non-deterministic order. This would make that each time files were linked in a different order and produce different binaries.

We can simulate this problem changing the order of files in CMake. If we modify the previous example to have more than just one source file for the library:

We can see that the results of the compilation are different if we change the order of files in the CMakeLists.txt:

If we make two consecutive builds named A and B swapping sources0.cpp and sources1.cpp in the files list the resulting checksums will be:

Object files .o are identical but .a libraries and executables are not. That is because the insertion order in the libraries depends on the order the files were listed.

Randomness created by the compiler

This problem arises for example in gcc when Link-Time Optimizations are activated (with the -flto flag). This option introduces randomly generated names in the binary files. The only way to avoid this problem is to use -frandom-seed flag. This option provides a seed that gcc uses when it would otherwise use random numbers. It is used to generate certain symbol names that have to be different in every compiled file. It is also used to place unique stamps in coverage data files and the object files that produce them. This setting has to be different for each source file. One option would be to set it to the checksum of the file so the probability of collision is very low. For example in CMake it could be made with a function like this:

Conan hooks can help us in the process of making our builds reproducible. This feature makes it possible to customize the client behavior at determined points.

Hooks can also be useful to patch binaries in the post_build step. There are different binary files analysis and patching tools like ducible, pefile, pe-parse or strip-nondeterminism. An example of a hook for patching a PE binary using ducible could be like this one:

Deterministic builds are a complex problem highly coupled with the operating system and toolchain used. This introduction should have served to understand the most common causes of indeterminism and how to avoid them.