We got Conan 1.16 release out this time with some features and many fixes. We are also sharing the ongoing the development of the upcoming enhancements!

Following the GCC releases we updated the default settings.yml to include the latest versions of the compiler.

Note that Conan by default uses the major versions of GCC only (8, 9…), as the minor is really a patch and those are intended to be fully binary compatible. The 8.3 and 9.1 minor versions can be explicitly defined though, in profiles and in command line, but they will result in different binaries than other minor GCC versions as 8.2.

There are cases in which creating binaries with the specific version will be handy, however, following just the major should be fine regarding binary compatibility.

Coming from a feature request, some people asked how to make the downstream dependencies rebuild if an upstream dependency changes. The truth is that you can really achieve this behavior modelling you package ID correctly in the recipes or globally changing the package-id mode.

However, this is a fine-grained control that will only work when bumping the version of a dependency but not when it is compiled again. To cover this use case we have introduced the --build cascade in policies.

For example, let’s say we have an application that requires cppzmq/4.3.0@bincrafters/stable and we have the following dependency graph for our app project: 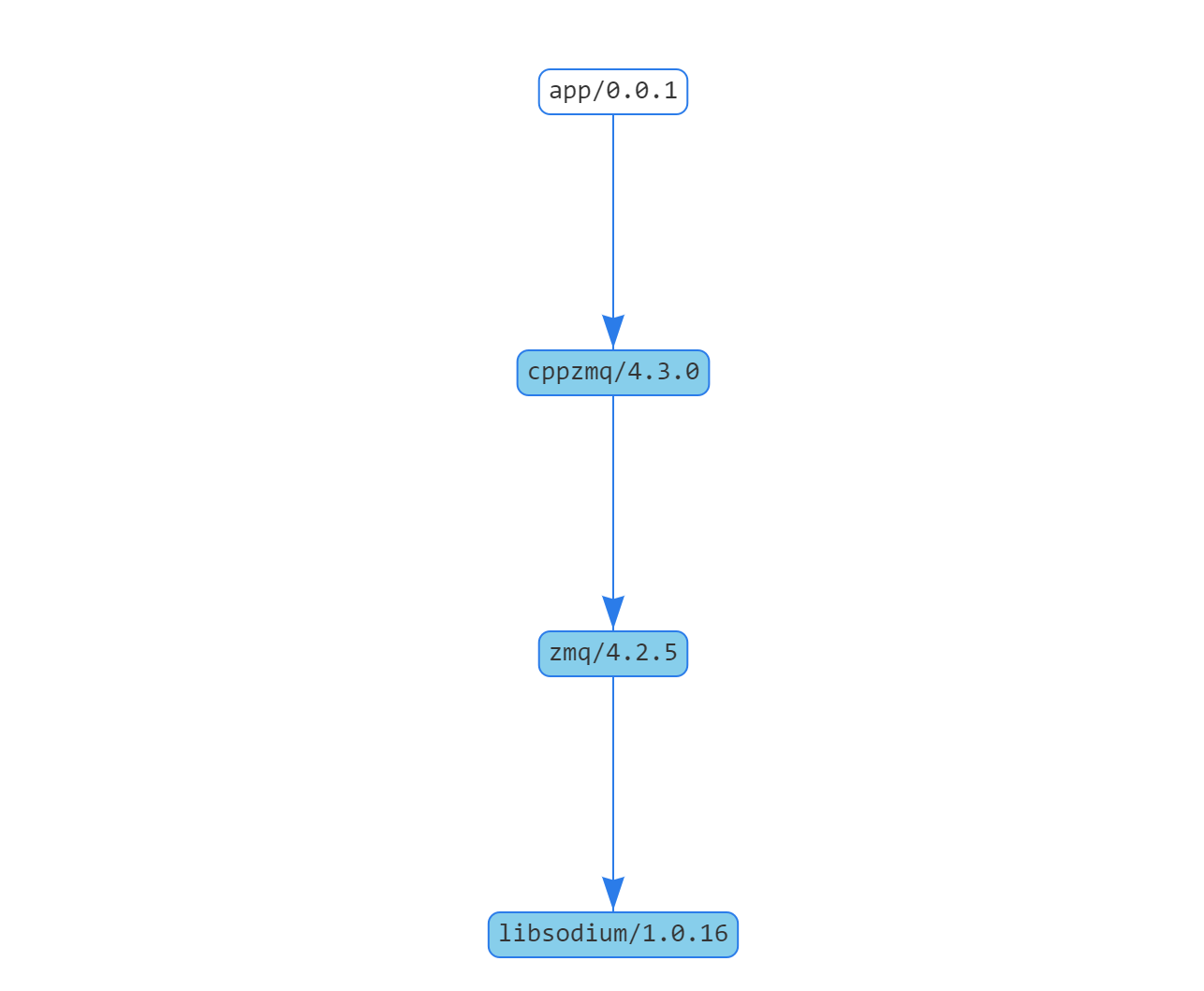 Now let’s say that for some reason the libsodium/1.0.16@bincrafters/stable upstream dependency has to be built, because for example, we fixed a bug in a header, (we are forcing the rebuild with --build libsodium). Now we can install the dependencies using the cascade mode and Conan will mark it as Build as well as the downstream dependencies:

This might be useful for doing basic CI rebuild operations too. If you want to rebuild when an upstream dependency changes, you can check the build order and fire a CI job for each dependency like this:

A less advanced feature but still quite useful when creating new recipes is the new --template flag for the conan new command. The template files support jinja syntax and the only variables available at this moment are the name and the version of the package.

Conan will look for template files in the folder ~/.conan/templates or will use an absolute path pointing to a template file.

For example, something like this could be used to generate a new Conan recipe:

Templates placed in the Conan cache will benefit from sharing over conan config install command. Check the documentation here.

As we did in the previous release post, the Conan team is under heavy development of key features. For this release we have been working on the lockfiles (a.k.a. Graph locks), the new cross-building model and the cpp_info components.

You can check the status of those features in the following links:

Note that this work is still a draft of the final features. Any feedback is always welcome.

As always, you can check the full list of features and fixes in the changelog. We are open for new issues with any bug report or feedback for discussion on GitHub.

Finally, don’t forget to update to this 1.16 release! Thanks!