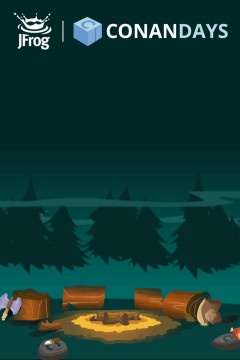 Conan is a free and open source (FOSS) project that implements a C and C++ package manager, consisting in a user side application and a server, that can be run anywhere, as the system is decentralized. We are running at conan.io a server instance as a convenience repository where users can read and write their own packages without having to run their own server.

Conan usage has quite increased in the last months and we were starting to have some issues with the conan.io server memory and processor. We were using a single machine where a conan-server, the conan.io web and the web-api applications were running. We had already scaled up the server adding resources to it.

The true problem was, whenever we needed to restart or do some maintenance to the server, we had to cut the service to all our users. That definitely had to be solved.

What have we done? We were already using docker to deploy our applications, and we had isolated running applications, so a lot a work was already done.

So, this is how we rolled out the new infrastructure, step by step:

Now we are ready to easily scale conan.io just by creating a new droplet and adding it’s private IP to the load balancer configuration. Load balancer will automatically distribute the requests and, if a server is down it will pass the requests to the other available servers. It will also be easier to do maintenance tasks without interrupting the service.

Why we started with just one server

Ok, nice post about devops…. hey, wait a minute! So, you were using just a single server for all conan.io? Well, yes, we were. We had several reasons:

This post might not be of high interest for many C and C++ developers or conan users, which might be interested in new features, libraries, etc. But it is something necessary, and as we are aware of some users already running their own server, we thought that this information could be useful for them too. Just remember, if you need help with your in-house conan server, we are here to help, write us an email.